PRINCETON, N.J. — Mark Emann, chief of Princeton Township Police, looks like a top cop out of central casting, with broad shoulders, a commanding voice and a no-nonsense deportment he may have inherited from his father, a former officer himself. Even his office seems lifted from a movie set, complete with a Dick Tracy poster, antique guns mounted on the wall, and a large American flag behind his desk.

But Emann, and the seemingly All-American town his officers patrol, are squarely in the crosshairs of a national debate since the implementation of a local identification card program in May. Both Emann and Princeton Borough Police Chief David Dudeck support the program, even as its detractors complain that it’s unlawful to extend public services to people living in town illegally.

Princeton is not the first town on the East Coast to issue such cards – New Haven began a similar program two years ago, and Trenton soon followed – but it’s certainly the smallest. Emann admits that Princeton’s hardly known for the kind of diversity evident in, say, the Bay Area, but says that its rising Hispanic population makes it an intriguing test case for the program.

“I was born and raised in Princeton, went to all the Princeton schools. When I was a kid, there were very, very few – if any – Hispanics. When I first joined the police in 1978, you [could] gradually see it start to increase. And now, I wouldn’t say it’s booming, but we have quite a large Hispanic population.”

Emann was approached in March by the president of the Latin American Legal Defense and Education Fund (LALDEF), who invited him to attend a community meeting to discuss extending the program to Princeton. He was surprised – and impressed – by what he saw.

“I’d been to many community meetings during my career, and they’re usually attended just by a few people. This was attended by nearly 70 residents in the community – primarily the Latino community – and they were very interested in having a form of identification so they wouldn’t have to carry around big and important documents like passports and birth certificates.”

After speaking with law enforcement in Trenton, and being assured of the program’s efficacy, Emann gave his department’s full endorsement. The decision hasn’t exactly boosted his popularity – Emann is quick to acknowledge the vitriolic remarks by anonymous online news commenters – but he’s committed to supporting the program indefinitely.

“There are the electronic forums at the end [of articles], where people can comment, and none of them were positive. Basically, the sentiments were, we’re anti-American, we’re aiding the Hispanics in the financial downfall of New Jersey. We’ve heard it all. But it’s a good program. It’s good for the police department, and it’s good for the community. There’s been teething problems here and there, but any problem that we see, we’re just going to make it work. We’re happy with it.”

Kevin Wilkes was at that community meeting in March and like Emann remembers it as an unprecedented demonstration of solidarity and involvement in the political process from the town’s Hispanic population. Wilkes, a councilman and chair of Princeton borough’s public safety committee, was also taken aback by the degree of support for the program that night.

“I had a certain pre-bias, which led me to think that people who live on the edge of our authorized immigration policy might not want a photo ID card,” he admits with a laugh. “I was completely wrong. We asked all the assembled people, if you had this card – and we explained what the conditions would be and how you would get it – of the 70 or so people in the room I’ll bet 65 hands went up in the air. And we were just stunned.”

Wilkes graduated from Princeton with a degree in architecture, and founded a company that builds and restores local residences. He learned Spanish to better communicate with the manual laborers under his supervision, and from them he earned an appreciation for the hardships faced on a daily basis by undocumented immigrants in America. He mentions this struggle when asked about the extent to which an identification card will benefit their daily lives.

“It doesn’t make the true difficulty of being an unauthorized immigrant in America – it really doesn’t make it easier. It’s a fiercely difficult life, all day long, every day of the week, to be invisible,” he said. “If anything, I’m surprised. It shows how desperate that life is, that the immigrants themselves would want these cards that completely say who they are.”

Kevin Wilkes, a Princeton Borough councilman, explains the benefits of his town’s ID card program and offers a positive characterization of the local immigrant community.

“ You can’t live in Princeton and be a loafer,” says Wilkes. “I assure you all these people get up at dawn and go to work. I’m in the construction industry; I see them all throughout the day. These are hardworking, honest, respectable people who for the most part are supporting their families back in their homes.”

Wilkes was one of the first to apply for and receive a card and stresses that the cards are available to all Princeton residents. While undocumented immigrants may derive unique benefits from the card, Wilkes believes it’s important for all Princetonians to own one.

“Another angle we are approaching our residents [is] teenagers, who don’t have driver’s licenses, out riding their bike, skateboarding: Why not have an ID card in their pocket with their name and address and Mom and Dad’s cell phone number? So I think part of the strategy should be to broaden the meaningfulness of the card, so that all members of the community can see the potential benefit and make it more than just the this-is-my-only-choice card.”

One particular instance where the card could have been useful, cited by both Emann and Wilkes, occurred on New Year’s Eve, when an undocumented immigrant in Princeton was robbed and beaten into a coma. When the police found him, he lacked identification of any kind, and Princeton authorities were unable to identify and contact his family during his subsequent weeklong stay in the hospital.

Wilkes says that having a municipal identification card program allows local law enforcement to focus on serious crimes rather than wasting time and resources investigating the immigration status of people committing petty violations.

“A littering summons does not require that we call the federal authorities and say ‘We have somebody here in our possession that we suspect may be an unauthorized visitor in our country,’” said Wilkes. “For public nuisance ordinances, we simply want to issue a $35 summons and be done with it. This card will give us a mechanism by which to do that.”

“There’s nothing we would like better than to be put out of business.” 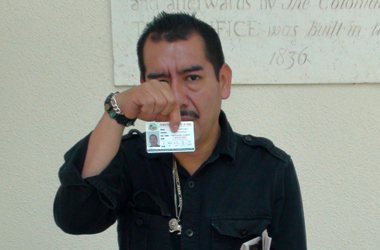 A man displays his new ID card on the steps of Nassau Presbyterian.

Shortly before 10 a.m. on a sunny June morning, Maria Juega kneels and purposefully plants a cardboard sign in a garden at Nassau Presbyterian. The president of the LALDEF then rises and strides down the walkway toward the church’s side entrance, smiling at the group gathered near the doorway. With a turn of her key, she leads them all inside and down the stairs to the basement.

For the next two hours, Juega and three other LALDEF staffers meet individually with applicants, examining their documentation – typically a passport from their country of origin to confirm their identity and a utility bill as proof of residence – and entering information into laptop computers as they go. After approved applicants pay the fee – $15 for adults, $5 for children – their photographs are taken with digital cameras, uploaded onto the computers and printed onto laminated cards. From start to finish, the process takes about 15 minutes per applicant.

Streamlined though it might be, the system is still something of an inexact science. Applicants are often unable to provide LALDEF staffers with their height and weight, having simply never needed to know those measurements. For that matter, those who do are typically unfamiliar with their equivalents on the U.S. Customary scale, as the metric scale is used throughout Mexico and most of Central America. A strip of masking tape is posted near the doorway, with penciled measurements written on it at inch-long intervals, for those unaware of their height.

By 10:30, the line of applicants snakes through this doorway and into a cramped hallway, where about 15 people wait quietly. Understandably guarded by nature, these immigrants speak to each other in hushed Spanish and offer only impassive and perfunctory responses to the staffers’ questions. Upon receiving their cards, however, many appear genuinely grateful and brandish their new cards for others in line to see as they leave.

One new card owner explained that he came to Princeton to find work as a laborer, and thought the card would help him if he was ever detained by police. He still took care to preserve his identity – he asked that his name not be used and covered his name on the card when posing for a photograph – but smiled as he bounded down the steps of the church and across Nassau Street.

Maria Juega, President of the Latin American Legal Defense and Education Fund (LALDEF), explains the reasoning behind the municipal ID card program her agency launched in Princeton, New Jersey, in May 2010.

It’s a reaction Juega attributes to a sincere desire to become more assimilated within the Princeton community. In the decades since Hispanics began settling in Princeton, their isolation has been reinforced by language barriers, lingering stigmas and ethnically segregated neighborhoods.

“Unfortunately, housing here in Princeton is extremely expensive,” explains Juega. “Therefore, [immigrants] have to share housing with another family – sometimes, there’s up to three families living in a house that may normally only be adequate for one family. So they suffer from conditions that are substandard in many respects.”

Demand for the card has been high since the program launched on May 22, and Juega admits to being overwhelmed. She and her LALDEF staffers volunteer their time each Saturday. While she wishes she could devote more hours and manpower to the program, she says she has an even loftier ambition.

“There’s nothing we would like better than to be put out of business,” she says with a laugh, “by a legislative reform that would allow this population to be able to step up and get official government identification of some kind. So we’re really hoping that that will be the case as soon as possible. But as long as [the cards] are needed and the community wants them we’ll continue to issue them.