How these pages work: As you scroll through the story, photos and videos will appear in this media box. Click on any image or video to view it in a larger format.

Dozens of cities nationwide have taken steps to protect immigrants from close scrutiny of their legal status. These “sanctuary cities” have been championed by liberals, condemned by conservatives and called home by many of the estimated 10.8 million undocumented immigrants in the United States.

PRINCETON, N.J. — It’s a sunny Saturday morning, and a gentle breeze ruffles the American flags hanging from the trees along Nassau Street, the main road in this quiet town. The sun is still rising above the university on the east side of the road, and a few joggers and stroller-pushing mothers are out. Otherwise, the sidewalks are empty.

In the shadow of the Nassau Presbyterian Church, however, a group of people are huddled quietly near a side entrance, waiting. 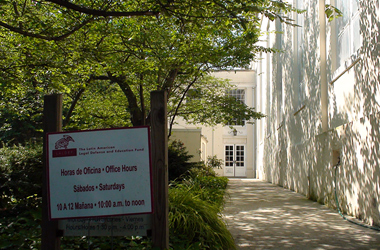 The side entrance to Nassau Presbyterian Church, where the ID cards are issued every Saturday morning.

Their presence, silent and unobtrusive as it is, is the only indication of a program that has recently transformed this Rockwellian town into an unlikely focal point of immigration policy debate.

Since May 22, the Latin American Legal Defense and Education Fund (LALDEF), a local nonprofit Hispanic advocacy organization, has issued identification cards to anyone who can prove they live or work in Princeton. The cards, which are recognized by local businesses and endorsed by Princeton law enforcement, enable residents without another valid form of identification to take advantage of a variety of public services – from opening a checking account to obtaining a library card – to which they would otherwise not be entitled.

Demand for the cards is highest among Princeton’s growing number of immigrants, many of whom are living in this country illegally and have no other means of establishing their identity. This is only the sixth day cards have been made available through the program, which operates for two hours each Saturday morning in the church’s basement.

Already, more than 300 cards have been issued since the program’s inception, however, and later this day LALDEF staffers will be forced to turn away people who have not made appointments to receive theirs.

The ID card program – and its strong support in this community – is emblematic of an ideology evident in several American cities that have made a point of embracing their immigrant populations. Some cities, most notably San Francisco, have gone so far as to openly publicize their tolerant policies, which protect undocumented immigrant residents from stricter state and federal laws. 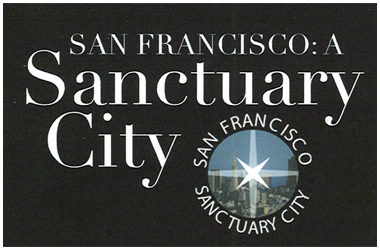 A brochure from San Francisco’s 2007 campaign to raise awareness of its sanctuary policies.

Others, like Princeton, have taken the proactive step of issuing municipal ID cards that offer direct benefits to undocumented residents.

Dozens of municipalities nationwide had already taken steps to protect the immigrants in their communities from the kind of scrutiny called for in Arizona’s SB 1070. In the wake of the uproar incited by the passage of that bill, these “sanctuary cities” have been championed by liberals, condemned by conservatives and called home by many of the estimated 10.8 million undocumented immigrants in the United States.

On July 21, a congressman brought sanctuary cities into the immigration debate by calling for federal intervention against their policies. The “Sanctuary City Prevention Act of 2010,” as proposed by Rep. Duncan Hunter, R-Calif., would deny the Department of Justice further funding to challenge Arizona’s law until steps are taken to bring sanctuary cities into compliance with federal policy.

While the future of Hunter’s proposal remains unclear, the growing line outside Nassau Presbyterian this morning – nearly an hour before the door to the basement will be unlocked – is testament to a defiant and unyielding desire shared by undocumented immigrants nationwide. They have congregated in the shadow of the church seeking not just an identification card but a facilitated assimilation into the fabric of this community. Though sanctuary cities might acknowledge this desire in different ways, each shares a common motivation to welcome a group that is in many ways at the doorstep of American society, waiting to be let in.